The Medical Physics Program at the University of Wisconsin began in 1958 when John R. Cameron (then a junior faculty member in the Physics Department) became interested in a program in nuclear medicine and started a collaboration with Dr. Halvor Vermund in the U.W. Department of Radiology. Dr. Cameron soon began attracting physics students to study and do research with him in various areas of medical physics. 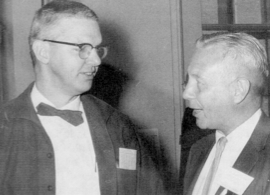 Figure 1 John Cameron (left) soon after his appointment to the Radiology faculty.

This program accelerated after he obtained a research grant from the Atomic Energy Commission to study thermoluminescent dosimeters. By 1966 he had guided students to the completion of 11 M.S. degrees and 1 Ph.D. The degree was granted either in Physics or in Radiological Sciences, which at the time was a section of the UW Radiology Department. Early students in Radiological Sciences took advanced Physics courses, wrote the physics qualifier exam, and earned their master’s degree in Physics before working towards the PhD in either Radiological Sciences or Physics. 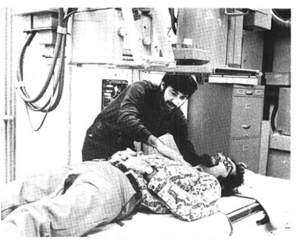 Dr. Cameron also began to create positions for other faculty members, and in 1981 the Medical Physics Section of the Department of Radiology included 17 faculties and collateral faculty in the various medical physics subspecialties. A spectrum of graduate courses, many cross-listed with Human Oncology, Physics or Nuclear Engineering, had been formed. Courses and clinical training covered all areas of both diagnostic and therapeutic medical physics as well as health physics.

Also in 1981, a new freestanding Department of Medical Physics was created in the U.W. School of Medicine and Public Health. Most faculty members retained partial appointments either in Radiology or Human Oncology along with their appointments in the new department. The number of medical physics Ph.D.’s averaged four a year during this period, while a similar number of students completed their studies with a Medical Physics Master’s Degree.

The department obtained CAMPEP accreditation in 1988. UW Medical Physics, along with Wayne State University, were the first medical physics programs in the world to attain this level of recognition.

In 2008 the department moved to its present location in the Wisconsin Institutes for Medical Research, or WIMR. WIMR is adjacent to the UW Hospitals on the westernmost part of the University of Wisconsin campus. The move united the department for the first time since 1978 when the “new” UW Hospitals and Clinics were occupied, with some medical physics groups also moving to that facility while the majority of the department remained on the central campus. WIMR provides faculty offices, student carrels, conference rooms, and extensive imaging and therapy labs.

Dr. Cameron served as Department Chair from 1981 to 1985, when he retired to an active emeritus professor status. Herb Attix assumed the Chair until his retirement to emeritus status in May 1987 when Professor Paul M. DeLuca, Jr., became Chairman. Paul’s tenure as Chair extended through December 1998, at which time he accepted the position of Associate Dean of Graduate Studies and Vice Dean of the UW School of Medicine and Public Health, and later Provost of the University of Wisconsin. Professor James A. Zagzebski was selected as chair in 1998 and served through August 2013, when he changed to emeritus status. Professor Edward Jackson was recruited as chair in 2013.